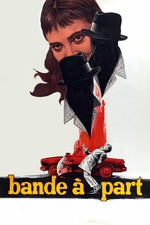 Anna Karina and Audrey Hepburn occupy a similar place in my mind, which is a compliment to both of them. They look a bit similar, they both bring that 60s manic pixie dream girl energy and aesthetic, and they're both extremely charming. Karina especially gives Hepburn vibes in Un Femme Est Un Femme, but in Bande á part she actually reminded me much more of my beloved Sylvia Sidney (Karina and Sidney look similar as well). Hepburn played serious roles, but she doesn't have that unpretentious devastation that Sidney does so well, and Karina channels that sadness in her role Odile. While Karina plays a tragic character in Vivre Sa Vie as well, Vivre Sa Vie does not have particular interest in the emotions of its lead, while Odile's facial expressions of stress and pain and betrayal are a major focal point of Bande á part. There are wonderful moments of humor or levity like the race through the Louvre (which felt Jules Et Jim inspired) or the English class scenes, but that doesn't feel awkward when juxtaposed with Odile's torment. Sylvia Sidney's movies are also often filled with quiet or simple moments of joy compared to larger instances of suffering; Hitchcock's Sabotage or Arzner's Merrily We Go To Hell are excellent examples of this in action. I know Godard is a giant cinephile because he never stops letting us know in his movies, but I don't know exactly what he thought of Sylvia Sidney though from Bande á part I have a feeling he was a fan.

Some unrelated moments of note:
1. The dance number
2. The robbery outfits complete with hats
3. A death scene that bewildered my dad but also made both of us crack up
4. Croc-'Odile'