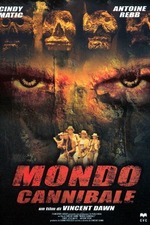 Here at Mondo Cinema we love cannibal films, its scary because you could conceivably be eaten by cannibals, just ask the Rockafeller family (too soon?) We especially love them when they share the same name as us Mondo Cannibal. Directed in 04 by notorious ripoff artist Bruno Mattei, this is almost a verbatim remake/rip off of Cannibal Holocaust, I will give them credit it really feels like an cannibal epic from the eighties, and is nasty gory, and has a generous helping of female nudity (Bruno hooked us up) The only issue here is the smooth jazz sound track on a cannibal film, possibly Mattei was ripping off Mondo Cinema favorite Jes Franco?
It's hard to go wrong with cannibal movies so if that's your bag pop this in for a watch. Check out some other films in the genre, such as Cannibal Ferox (they cut a guys dick off and eat it) Jungle Holocaust where our hero takes the time to rape a woman while fleeing his jungle captors, and Mountain of the Cannibal God featuring Stacy Keetch vs cannibals.