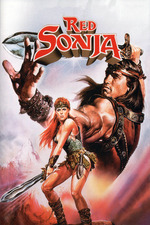 Coming in the summer of '85, Red Sonja brought to you by cocaine and misogyny!
That would have been a more truthful advertisement for the utter dreck that is Red Sonja.
It's a muddled mess of a film, with an inconsistent tone, terrible acting and story, and what's worse is instead of being a film where the hero is a strong independent woman, it's one where the female lead takes a back seat to Arnold Schwarzenegger, in her own movie.
Schwarzenegger's picture is bigger on the movie poster, and his name comes first and in a larger font during the opening credits.
Instead of gaining her skills though self perseverance and hard work and training a magic ghost gives her the strength and skills. (A plot point never mentioned again.) Also, any dangerous situation in the movie Sonja gets into, she is bailed out by Schwarzenegger. She can't be the hero of her own movie. Why even make this movie then? Why not just make a Schwarzenegger barbarian film with Red Sonja as a supporting character, that's what this movie is anyways.
Maybe this is what a group of assholes think a woman hero is?
Even without all the gender role issues, Red Sonja has a truck load of problems.
Nelsen was basically hired off the street to to her "Amazonian" looks, and it shows in her stone faced wooden performance.
There are moments of intentional comedy that are down right stupid and derail the movie. For instance, the Mutt and Jeff comedy duo of Prince Torn and Falko is almost insufferable. There is a gag in the movie where the villains are trying to spy on Sonja with a magic view screen (Almost all these movies have something like it.) The first image is a naked dancing woman they have to "Change the channel" to see Sonja. Something like that might fly in a Mel Brooks movie, but not in a blood and guts fantasy film.
There are scenes that go way way to long, a legitimate ten minutes could have been cut from the movie with no issues.
It appears some money was spent on making it, it has some great sets. There must have been some high hopes for it as well, getting a July release. Those Hope's died pretty quickly though.
The only good aspects besides the sets, are a score by Morricone, great costumes and better cinematography than this film deserved.

Thoughts and notes about Red Sonja

Another murdered family and another home set ablaze, it's literally the same movie being remade over and over.

Red Sonja "mastered the master " but did not master the acting.

She possesses the most powerful mullet in all of the Hyborian age.

You know, Nelsen is pretty good with that sword.

"I can't kill it, it's a machine" is a line in the movie, used while trying to kill an apparently robotic monster. It's a movie set in a primitive fantasy land. Really? Really, come on now really?

If Arnold is not Conan in this, is he possibly the cousin of Conan?

That wall climbing scene.....fuck this movie.

What in the name of Crom is this shit?

Red Sonja may have had more money and bigger stars than something like a Yor or an Ator, but it lacks any of the charm and fun of those two.