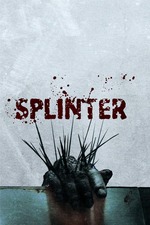 Splinter is an exciting, gory horror flick, that is part the Thing, part Night of the Living Dead with a dash of Assault on Precinct 13.

A couple spending their weekend camping, (Paulo Costanzo, Road Trip)
(Jill Wagner, lots of Hallmark Channel Bullshit) are taken hostage by an escapee and his girl friend. (Shea Whingham, Kong Skull Island) (Rachel Kerbs, Heist) They are all placed in grave danger because of a bizarre Parasite that feeds off of blood and can reanimate its victims.
Now stranded and surrounded in a gas station they must work together to survive.

I really enjoyed Splinter. It reminded me a lot of the thing, the parasite can reanimate dead bodies or parts of bodies, so you see arms hands fingers etc trying to kill the people inside the gas station.
Its a small scale movie, there are only a hand full of characters, and 90% of the action takes place at the gas station. Its simple and to the point, no wasted scenes or filler, I appreciate that.

The Good....
Shea Whigham.... He is fantastic as the standard criminal with a code character like in Assault on Precinct 13. It ads elements of action films to the film.
The SFX....The effects are pretty good, the parasite corpses look convincing enough.
The ambiguity of the parasite....It never really says what it is, alien? genetic lab experiment? Bio Weapon? I love a movie that lets you think and imagine things about the plot long after you watch it.

The Bad....
I wish there was a little more resolution to the story.

For more horror with people trapped by creatures etc check out...
The Mist, Thomas Jane is trapped in a grocery store by an otherworldly mist full of monsters, watch that ending its a downer.
Night of the Creeps is a cult classic about parasite slugs that create zombie like carriers. Of course we cant forget to mention The Thing, the John Carpenter classic about an alien organism that copies people on a genetic level.